Last week we shared unique evergreen trees that do not drop their leaves once winter hits, even though they aren’t conifers (pines, spruces, and the like). This week we’re going the opposite direction. Here are some trees that look like they keep their greenery year round, but such is not the case: 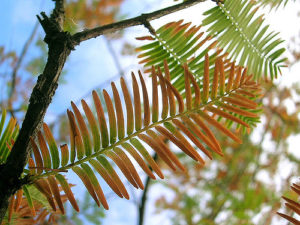 Smaller than its cousin in California, the dawn redwood is a stately, pyramid-shaped tree that loses its needles in the fall – thus earning its designation as a “deciduous conifer.”

Dawn Redwood (Metasequoia glyptostroboides)
A literal living fossil, the dawn redwood was believed to be a long extinct species. However, in the 1940s the tree was discovered shortly thereafter in a rural village of the Sichuan province in China. It has a very reliable pyramidal form that makes an attractive silhouette in the winter. You will never need to prune a Dawn Redwood to get this lovely form. Its feathery flattened-needle foliage is deciduous and makes for nice fall color, making this a unique deciduous conifer. While its cousins in California may tower over the forests, dawn redwoods grow to only about 50 feet in 40-50 years making them a great addition to a yard – even if you’re short on space! You can get up to $50 back for planting this tree yourself through our tree rebate program. With its flared trunk and brassy needles, the bald cypress is quite a sight in the fall.

Bald Cypress (Taxodium distichum)
Known as the swamp king of the South East, it is called “bald” because it drops its leaves in the fall. Before dropping its lacy needles, it turns a vibrant russet red color. It’s also a unique specialist species – it evolved to succeed in its unusual swampy environment. Therefore, it has evolved some interesting traits to thrive in wet and swampy conditions. The trunk of the bald cypress flares near the base – this makes for a very stable trunk that can withstand the rigors of flood events and waterlogged soils.  While the bald cypress is happiest in its swamps, the tree still has something to offer us city-dwellers. It turns out that Bald Cypress actually does pretty well on dry sites and its absence from areas outside of swamps was probably due only to its susceptibility to fire. Straight-trunked and stately, the bald cypress is a native tree that adds a unique character to a home landscape. Get yourself your very own Swamp King through our residential planting program, RiverSmart Homes or plant one yourself and receive up to $100 back through our tree rebate program. The gold foliage of an Eastern larch is especially striking against evergreens.

Eastern Larch (Larix laricina)
Eastern Larches, also known as Tamaracks,  are eye catching in all seasons. In spring, small rosy pink cones can be seen as new needles begin to emerge. In summer, the soft green needles give the tree a fine texture. In autumn, the needles turn yellow before they fall. Other Larches such as the Japanese Larch (Larix kaempferi) and European Larch (Larix decidua) are also noted for their outstanding yellow to yellow-orange fall color.