Why Do D.C.’s Poorer Neighborhoods Have Fewer Trees?

We were featured in an interesting and thought provoking article about the intersection of green space, tree planting, community building, income distribution, and city poverty. Therefore, we couldn’t help but share it with our people! Discouraged about the citywide difference in tree cover? Sign up to be an outreach volunteer and get the word out, become a tree advocate to speak up for trees, or contribute to the canopy. Any bit helps us reach our canopy goal!

Sourced from: Why Do D.C.’s Poorer Neighborhoods Have Fewer Trees?, Jacob Fensten, WAMU

Since its earliest days as the nation’s capital, Washington D.C. was known for its trees, earning the nickname the “City of Trees.” But in today’s Washington, those trees aren’t equally distributed. The District’s wealthiest neighborhoods have 42 percent more tree cover compared to the poorest neighborhoods, according to a recent study. 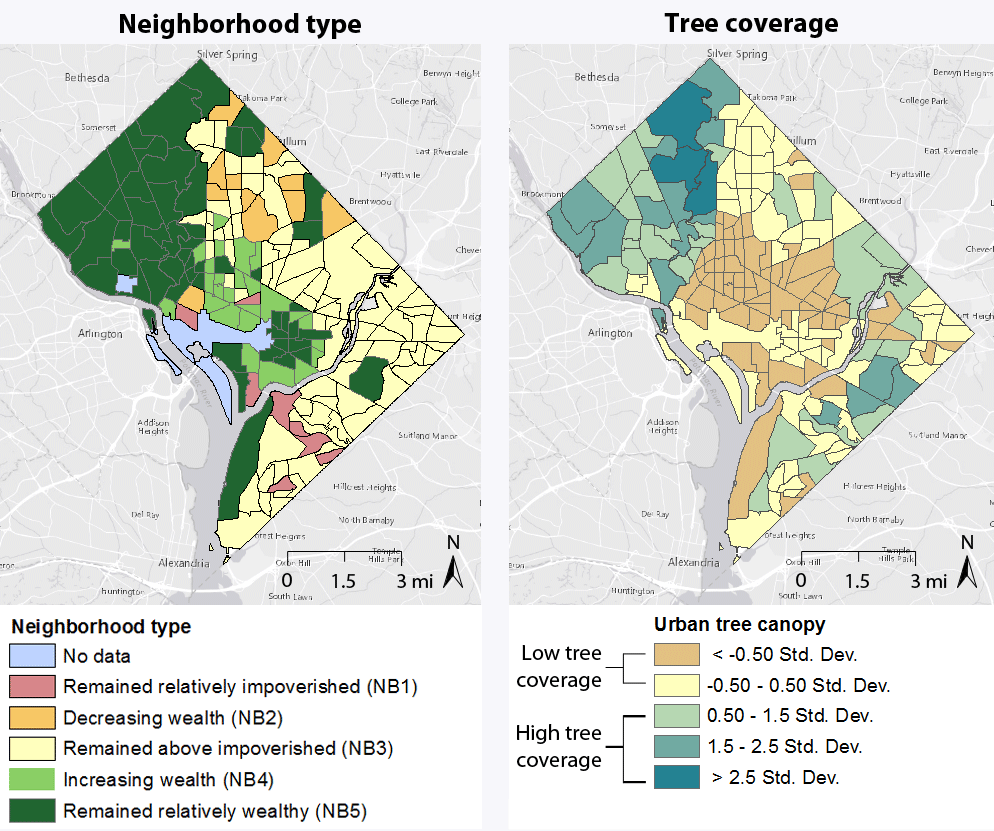 This disparity in tree cover isn’t just an aesthetic matter. People living in areas with few trees miss out on a long list of benefits that research shows trees provide. Trees improve air and water quality, and cut down on cooling costs and energy use in the summer. They also help reduce stress and improve physical health by encouraging outdoor activity.

So what’s behind this tree gap in D.C.?

Today’s tree canopy reflects decisions and actions taken decades ago. To understand D.C.’s tree disparity, you have to look at what was happening 20 or 30 years ago, when today’s mature trees were being planted. Or, in many areas, not planted.

Cene Ketcham, an extension arborist with the non-profit Casey Trees, works to spread the gospel of trees, drumming up interest in tree planting in neighborhoods with less tree cover.

Neighborhoods like Trinidad, in Northeast. On a nearly treeless block on Montello Avenue, Northeast, just a few twiggy trees line the street, between the sidewalk and curb.

“Three or four in a row that look like they were planted in the last two to three years,” Ketcham said.

Ketcham said landscapes like this have their roots in some of the District’s most troubled years: the 1990s. Rampant crime was many residents’ top concern. Meanwhile, the District government was flat broke. In 1995, a federal control board took over the city’s finances, slashing budgets.

“Trees were the first thing on the chopping block, so to speak, when budget cuts came in,” Ketcham said. “So trees were not pruned, there was a lot of standing dead trees. Service requests weren’t being fulfilled.”

In 1995 and 1996, no trees were planted by the city government, while 4,000 District-owned trees died each year. By the end of the decade, there was a backlog of thousands of dead trees needing removal, and tens of thousands needing trimming.

But the city didn’t neglect all neighborhoods equally. About a mile south of Trinidad, 10th Street, Southeast, on Capitol Hill has a similar built environment of row houses with small yards. But it’s a study in urban forestry, with a dense canopy of fall foliage, in hues of green, red, yellow and orange.

“You’ve got big trees, little trees, pretty much any place you could put a tree or a shrub there’s something planted,” Ketcham noted. “Generally, wealthy areas are not the subject of governmental neglect, even in tight times.”

Not everyone wants more trees

Of course, many trees in the city are on private property, and the level of tree canopy depends on residents deciding to plant trees, or not, and deciding to request street trees from the city, or not.

On a recent morning a group of volunteers, lead by the non-profit Earth Conservation Corps, was planting trees at the public housing complex Syphax Gardens, in Southwest. Until this effort, the courtyards between buildings were bare grass and asphalt.

But not everyone was thrilled to see the new greenery going in.

“I mean, I know that trees will beautify the neighborhood,” said Ladawn Bynum, who lives above one of the courtyards being planted. “But little bushes, and I guess like roses, and stuff that’s in the ground would be better.”

She said she likes trees, but worries that here, they’ll cut off sightlines, providing cover for criminal activity.

“It’s not the trees’ fault, but a lot of people in this neighborhood don’t have the best intentions. So, the way it is I think is okay, because you can see what’s going on.”

The connection between trees and crime is still up for debate: some research has backed up the idea that vegetation can enable criminals; other researchers have documented a correlation between higher tree cover and lower crime.

Another reason people may not want trees is the expense and hassle of maintenance, and concern about falling tree limbs. damaging property. Homeownership is part of the equation too: in wealthier neighborhoods more people own their own homes and are more likely to invest in landscaping and request trees from the city, while in poorer neighborhoods, renters and landlords may have less incentive to invest in trees.

“One of the most telling factors is the service requests we get for tree planting,” said Earl Eutsler, who runs D.C.’s Urban Forestry Division. He’s responsible for the District’s 150,000 street trees. He says that in parts of the city that have dense canopy and very few empty tree boxes, any time a tree dies and gets removed, multiple residents will call in to request a new tree. “Whereas in other parts of the city, where, for a number of factors, we have many open spots, we’ll receive few to no requests for tree planting along those spaces.”

In the early 2000’s the city’s foresters were barely keeping up with removing dead trees and maintaining existing ones. They would plant about 4,000 trees a year, but divvied them up equally across all eight wards. Leafy areas might get all their dead trees replaced, while wards with big gaps in their canopy would see little progress.

“If a neighborhood had a lot of open spaces, we weren’t necessarily gaining ground,” said Eutsler, who started at the agency in 2004.

Now, the District is taking a completely different approach, focussing on neighborhoods that were historically underplanted, and planting twice as many trees, compared to five years ago.

“When you stop maintaining your street tree population, it can take many years to recover, and so that’s the situation we’re facing now.”

Eutsler said at the current rate, every ward in the city could be fully planted within three years, meaning every available sidewalk strip would have a tree.

“If you had asked us five years ago if that was possible, we would have said, theoretically,” said Eutsler. “That is actually now a reality. We have been able to make incredible gains in the last five years.”

This new approach isn’t unique to D.C., but rather part of a larger change across the country.

“Urban foresters are realizing that trees are basic infrastructure,” said Morgan Grove, a research forester at the U.S. Forest Service in Baltimore, who has studied D.C.’s tree canopy. “That’s a shift we observe not only in D.C., but Baltimore, New York. This idea that trees are just basic things that we need for the health of the city. And in order to keep the city healthy, we need to do it for everyone.”

Residents’ attitudes may be changing too. In the past few years, there have been more requests for trees in D.C. neighborhoods that didn’t used to ask for trees.

On a recent morning a city crew was busy planting 25 new trees in the Kenilworth neighborhood of Northeast. James Wagner, who lives nearby, observed their progress approvingly during his morning walk.

“You know, it makes the neighborhood look better. Before they started, it was just bare.”

It took the crew just a few hours to plant a truck full of young trees. But the trees’ full effect on the canopy won’t be felt for decades, until they reach maturity. So, even with all the thousands of trees being planted now — by the city, non-profits and residents — and even if every tree box is filled in the next few years, it could be a generation before the District closes its tree gap.