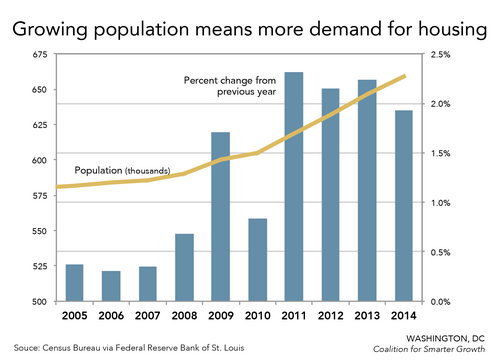 In a single decade, from 2005 to 2015, D.C. gained 77,000 new residents but only 12,500 new housing units. Since then, the number of building permit applications have risen, but there’s another component that’s of growing concern – affordability. In 2018, 91% of all multi-family homes produced in the District were “high-end” luxury apartments. Unfortunately, even though the housing supply has increased, the income for many of D.C’s residents has not. Public housing initially began as a federal investment as a way to provide a safety net and house moderate-income families, but due to demographic shifts, the composition of income in public housing has shifted to the working class* and low income* families.

Many of these public housing developments have fallen into disrepair after decades of neglect – now targeted for their redevelopment potential especially in flourishing mixed-use neighborhoods like NoMa and the Capitol Riverfront. Residents still living in these communities face the threat of displacement during the construction timeline. For those able to return to their neighborhoods post-development at reduced rates due to Inclusionary Zoning or Community Benefits Agreements, they often return to more change than just the demographics of their neighbors.

The majority of public housing in the District was built at least 50 years ago. The trees that were planted at that time have since grown to be as tall as mid-rise apartments, helping to establish a sense of community and place. These trees aren’t ordinary trees. The number of trees in the District with a circumference of 100” and above are becoming increasingly rare. District land is some of the most expensive in the country, and with a booming city population, is highly coveted. The challenge that lies therein, is that developers moving in to provide brand new retail and luxury apartments often request to raze the site in its entirety to start again from scratch. This spells disaster for the trees that have been thriving in place for over half a century.

We believe it’s possible to provide a better quality of life to lower income families in the District while protecting our valuable natural resources. Prefabricated units, innovative architecture and design, and advanced green infrastructure all make it possible to weave greenery into the development fabric. Access to green spaces should not depend on whether someone is able to afford it. We’re at a pivotal point in our City’s growth where development can either help us achieve resilience in the face of a changing climate or it makes trees an afterthought.