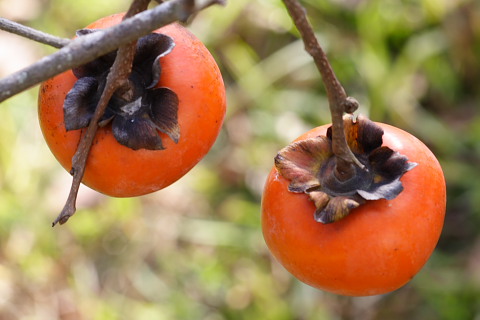 Tree of the Month: Persimmon

The American persimmon, first documented in Virginia in 1609 by the English captain John Smith and later named Diospyros virginiana, is native to the majority of the Eastern and Midwestern United States. Although alien to the newly arrived settlers, who were unsure of what to make of its bitter fruit, it was a vital part of southeastern Native Americans’ diet. The American persimmon today is characterized most notably for its fruit, as well as its bark and leaves.

Though it is now sometimes planted for its ornamental properties, it is often the first tree species to begin growing on abandoned and stripped cropland. It is not uncommon for it to be seen along the sides of roads and across empty fields or in more rural areas, but becomes more dispersed in urban and city settings. In urban areas, the persimmon’s presence is valued much more than it is in regions where the persimmon spreads naturally, with residents working to control its growth and even killing it with harsh chemicals.

In the spring, fragrant, white to greenish-yellow flowers bloom, with its fruit ripening in September through November. Before maturity, the spherical fruit is light green in color and astringently bitter in taste, due to its high tannin content, which lessens as the fruit ripens. The persimmon fruit then becomes orange to reddish-purple and sweet once reaching maturity. Once reaching maturity, the fruits will fall to the ground. Persimmons are not only enjoyed by people, but also by many wildlife creatures such as deer, raccoon, opossum, and fox. An American persimmon will bear fruit beginning anywhere during a three to ten year period, depending on the origins of the tree (grafted versus from the seed). They peak typically between the ages of 25 and 50 years and produce about every two years.

Cherished for its ornamental qualities, the American persimmon has leaves with shapes ranging in ovate to elliptical, which are dark green and glossy. In the autumn months, leaves turn a golden yellow before dropping. Besides its distinct fruit, the American persimmon is also easily recognized by its dark gray bark, which is in rectangular blocks and resembles the hide of an alligator.

The tree is prized for both its bark and its fruit. It is a member of the ebony family, meaning that the wood is very durable and hard, and is traditionally used to make golf club heads and billiard cues. Although this practice has declined, high quality and artisan clubs are still made from persimmon wood. Its fruit, although not shipped/sold while it is ripe due to its fragile state, is commonly used to make syrups, jellies, ice creams, or pies.

The persimmon also possesses a unique quality; according to folklore, a spoon pattern located in the white sprout in the center of a seed, seen when cut open, indicates a winter laden with snow, a fork pattern a mild winter with good eating, and a knife pattern a winter with cold, harsh winds. Nothing like a good, ol’ fashioned weather prediction to accompany a delicious pie. Which we may need this season because the seeds this year are all spoons.

The American persimmon is a fairly resilient tree, and although it grows best in moist, sandy soil, it thrives in and adapts to almost all soil types. Most diseases and insects typically are not harmful to the species, and it is even somewhat drought tolerant, making it desirable for many homeowners. As for mobility, its taproot, which burrows deep into the ground, makes transplanting rather difficult. Despite complications posed by moving the tree physically, it has naturally spread and become invasive in abandoned areas. However, the deep-root system is not completely burdensome; by being engrained far down in the soil, it helps to control erosion. There are both male and female trees, and for homeowners who do not want to manage a fruit-producing tree, there are select male varieties which don’t yield fruit. To simplify the tree’s reproduction process by not needing both a male and female plant to pollinate, plant breeders have produced a native persimmon which is self-fertile, including varieties such as ‘Yates’ and ‘Meader,’ both of which Casey Trees plants.

Another closely related species is the Asian persimmon, Diospyros kaki, which is native to China and is the most widely cultivated. Its fruit is highly respected throughout Asia, and is thought to have a healing power that can be used to alleviate headaches, foot aches, and back pains. The fruit, also sometimes called the “Korean mango,” is the least astringent and can be sliced or eaten whole, and is often added to salads, pancakes, cookies, jellies, jams, marmalades, syrups, puddings, australian essay writers ice creams, or pies. In comparison to our native, American persimmon, however, the Asian persimmon does not possess the same complexity nor range of flavors.

The American persimmon is losing interest, despite its beautiful foliage, unique fruit, and valuable and hardy wood. Its fruit cannot be sold commercially because it is too perishable and often falls victim to grazing deer and cow, leaving ants to dispose of what is left. The culture surrounding this native tree, however, is still alive but is also dwindling into a fond memory. It is up to us research papers leisure time to revive the culture of the American persimmon and to create memories with these trees and our friends and family, so that they can do the same. Try gathering enough fruit to make a persimmon berry pie! We’ve even posted a recipe below.

Step 1: Mix one cup of diced, ripe persimmons with three cups of berries. For berries, I use the Dole berry blend mixture (frozen) found at grocery stores. The berry blend has blackberries, raspberries, blueberries, and dark cherries.

Step 2: Add 1/3 cup of sugar and 1/2 cup of flour to the persimmons and berries and mix well. If you like a very sweet pie, use 1/2 cup sugar. Optional: Mix in a tsp of vanilla extract and a tsp of cinnamon.

Step 3: Spread the persimmon and berry mixture on the bottom pie crust. Cover with the top pie crust. I use the Pillsbury pie crust that is found in the refrigerated section of grocery stores because I’m too lazy to make pie crust from scratch.

Step 4: Moisten the top of the pie with water or milk and apply a generous coating of sugar (or sugar-in-the-raw). Sprinkle with cinnamon. Make slices in the top pie crust to vent the pie.

Step 5: Bake the pie for 40-45 minutes at 425 degrees. You may need to cover the outer edges of the pie crust with aluminum foil the last 15 or 20 minutes of baking to prevent the edges of the pie from over cooking.

Cool for 45 minutes and serve with vanilla ice cream or your favorite topping.

Here’s a map of where you can find persimmons throughout the District.