Cherry blossoms – love em or hate em they are a staple of our city (and urban forest!) that are truly a magical sight during #PeakBloom. Since this winter was quite warm and we’re roaring into spring-like temps, the famed cherry blossoms that line the Tidal Basin are cruising through their blooming stages and are on their way to beloved #PeakBloom, which is when 70% of the Yoshino Cherry (Prunus x yedoensis) blossoms are open.

The National Park Service announced last week that Peak Bloom is predicted to be March 27 – 30. Peak Bloom is the culmination of five stages for the cherry trees: Stage Two: Florets Visible. This usually starts around the second or third week of March. However, back in 2015, stage 2 started April 1. (Courtesy National Mall NPS via Twitter) 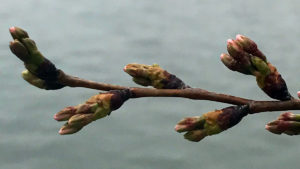 And always, we have plenty of resources to help you enjoy the beauty of those pink blossoms far away from the Tidal Basin. Our blossom map charts the location of flowering trees – including cherry blossoms – all around the city.